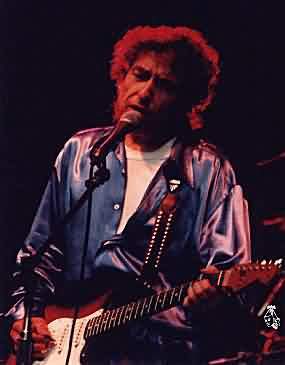 In 1963 I heard him for the first time. And since then he has been a very important part of my music-life.
Many will surely claim that Dylan has a terrible voice. We've heard that since his very first appearance - in the folkclubs in Greenwich Village in early 1961.
- He can't play an instrument, others say.
I agree that he doesn't have "His Masters Voice".
But he is true and personal, and that's more than enough for me.

And his texts are brilliant.
Others also have accepted his poetry.
In 1990, for instance, he was honoured with the medal of Commandeur Des Arts et Des Lettres
(the highest cultural French award that can be bestowed to a foreigner).

Expecting Rain
A fantastic site by a Norwegian - Karl Erik Andersen. Go there!!!!!!!
Bob Links
By Bill Pagel. Contents everything. And then I mean everything!!!!!!!!!

"If you take whatever there is to the song away - the beat, the melody - I could still recite it."
Bob Dylan 1965